"Working with police cadets, their enthusiasm and how they engage with the role, it’s reinforced my faith in young people and what they can achieve." 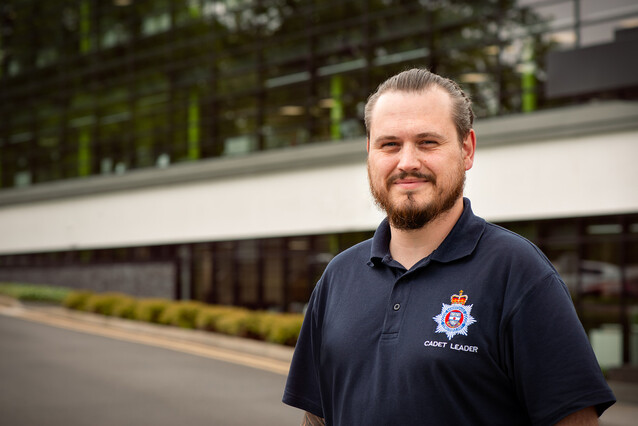 Beyond The Badge - Chris Bannister

As part of our #BeyondTheBadge feature, we've been speaking to the people who make up Derbyshire Constabulary. This is Chris Bannister - Cadet Leader.

“I’m now a Cadet Leader for Derbyshire Police. I enjoyed my years as a PCSO and PCSO Supervisor but I was ready for a new challenge. Working with police cadets, their enthusiasm and how they engage with the role, it’s reinforced my faith in young people and what they can achieve.

I first joined the police when my dad suggested I consider the PCSO back in 2007, he was in the CID, a Detective Inspector, my uncle was a police officer and I met my wife in the police too. My mum became a fingerprint expert after a career change, so policing is really ingrained in my family.

After training is when the learning really starts. You never attend two identical incidents, every shift there’s something new so the learning curve is steep. You get a lot of experience so quickly; it changes you as a person. I was shy and quiet when I started, but you interact with all manner of people and you learn to be a good communicator and the best way to deal with them.

I see the role of #PCSO as a nice uncle, or aunty, the one that you will happily tell stuff to, but that you will also listen to if they tell you off.

I know online that people have their views about PCSO’s, that they don’t have any powers.  I don’t think those people have really interacted with a PCSO. When you’re out in the community, getting to know people, helping those that need it and keeping troublemakers in line you get a lot of respect. You help to make people feel reassured and they are the ones that can see that you are really making a difference.”